Amir Sultan Line// The Koshur now spoken is a hodgepodge of words from Urdu and Hindi, and to some extent corrupted English, and is thus not Kashmiri at all. 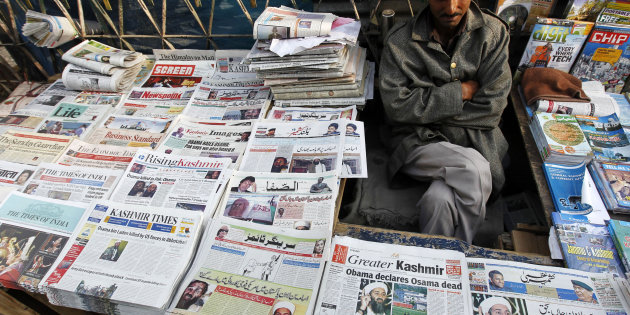 They say ‘if you want to kill a nation; kill its language’. Language is not just the words coming out of our mouth used for conversing. It is an identity, an idea inside that relates how we think and how we see each other, and how others see us. Our own state, Jammu and Kashmir, has a distinctive identity of being a state which has accommodated people of diverse ethnicities and where more than ten languages are spoken. The language spoken by the greatest majority in the Kashmir Valley is Kashmiri; Koshur, to be exact, which has the privilege of being one of the 22 languages mentioned in the eighth schedule of the constitution.

Language is a vulnerable aspect of cultural heritage. Merely having a large number of speakers does not put a language out of the risk of getting extinct and, without exaggeration, any language is at risk when it is not taught to the younger generation. Owing to its lost patronage, the danger to Koshur is such an important concern that without it, speaking of Kashmiriyat or Kashmiri-ness has no meaning.

The occupation of a land by foreign rulers has an impact on the native culture. Language bore the brunt of the subjugation of Kashmir by foreign rulers and the incessant change of regimes. The introduction of Persian as the court language due to the unfamiliarity of rulers with the native language and due to their own interests destroyed the patronage that Koshur once enjoyed. The interaction with Persian led to the introduction of many Persian words into the Kashmiri language. The introduction of Urdu as the official language during the Dogra period pushed Koshur further into background. Similarly, the coming of English into Kashmir too had its effects on the native culture of Kashmir. Many English words were absorbed in a mispronounced form, such as noon gargar (gargle) and matras (mattress ).

At a time when states are being carved out on a linguistic basis, Kashmir is losing the essence of its language. The Kashmiri we speak now is a hodgepodge of words from Urdu and Hindi, and to some extent the corruption of English words, and is thus not Kashmiri at all. Our minds are colonised to such an extent that we consider those people inferior whose Kashmiri words end up with the letter ‘d’ as in Kupwod (Kupwore) or hod yod (hor yor). The result is that the people from rural areas, when they move to Srinagar, are forced by the circumstances to surrender their dialect before the so-called standard dialect. We should, however, understand that these are only different dialects, there is no superior or inferior Kashmiri. We don’t have to be ashamed by our regional dialects.

As a matter of fact, we as Kashmiris love our language and are obsessed with it to the extent that we wouldn’t even bother to switch to a lingua francaeven if in the company of non-Kashmiris. But the fact of the matter is that we are rendered handicapped by circumstances and are unable to speak it properly. Truth be told, not many Kashmiris are now able to deliver a good speech in their mother tongue – and even if somebody manages to deliver it, not too many will be able to understand them. The case is no different with Kashmiri songs. The old melodious songs of Hassan Sofi and the like are stilled loved by the people; even the younger generation finds solace in their songs, yet they are hard to understand because of our unfamiliarity with the vocabulary. Having a rich literary and cultural tradition, a plethora of literature has been produced by iconic Kashmiri writers in the past. But ironically, only a few people are left who can actually read it. Only a few rare attempts are being made to revive that literally tradition of writing and reading Kashmiri literature.

This situation has rendered the mass population of Kashmiris deprived of every language. The case is no different with Urdu, our official language. We are unable to speak it in its original form, forget about writing in it. The embarrassing situation is when we transliterate Kashmiri words to form a sentence into Urdu – “Darwaza de do [darwaz di]”, “Mai wahan mat na gaya tha [Ba maa osus gumout]”, “Gadh́i mai overload tha phir mai khada baith gaya [Gaadi manz oos overload, pat byuthus ba khada]”. Of late, however, we are trying to encourage our children to speak Urdu at home and in school, which is a good thing unless it is done at the cost of their mother tongue. This could have helped them learn an extra language, but due to the fact that we don’t speak Urdu properly we end up teaching our children wrong.

The question now is, what needs to be done? Both at the individual and the collective level we need to strive for the amelioration of this situation. There is a dire need for government patronage to preserve our indigenous language. So far the efforts have been marginal and not very effective. While political parties introduced Koshur as a language in elementary schools, it is as a subsidiary subject, not a primary one. The Doodarshan Kashmir channel is a paradox in itself. It broadcasts mainly in Urdu and the content of the channel is so insipid that people prefer to watch other channels. Some NGOs have tried to organise conventions, but the problem is that the language is so little understood or read that it does not help. It goes over the heads of most attendees.

If Koshur is to survive and prosper, the teaching of the language has to be incorporated at the school and college level, with seminars and workshops on language skills made an important part of the school curriculum. The use of Koshur in newspapers and literature needs to be systematically encouraged. Only when enthusiasm is instilled among the younger generation to preserve their rich cultural heritage will the language have a future.

Amir Sultan Lone is a PhD research scholar at the Department of History, Aligarh Muslim University.

0 comments on “Rescuing Koshur in Kashmir”