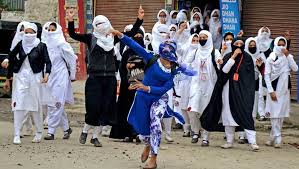 Stone throwing on a common enemy is a historic method of showing anger, resistance and revenge. It is similar to stoning,  which is a method of capital punishment. In stoning, a group of people with shared social, cultural or religious ties, throws stones at a person/group until they die.

No individual among the stoning group can be identified as the one who kills the subject. This is in contrast to the case of a judicial execution. Slower than other forms of execution, stoning within the context of contemporary modern culture and civilisation is considered a form of execution by torture.

Stoning is historically associated with ancient societies of Arab and African countries. In ancient times, social renegades were sentenced to death by stoning. In modern times, stone throwing, which is very similar to stoning, but less lethal as it is not used to intentionally kill the enemy but as a ploy to advance the political frustration.  It is a symbolic, highly controversial and criminal action to register protest and resistance against brutal force.

Kashmir region is well-known for its stone pelters. They have coined various terms to describe different actions associated with such protests.  In this region, it is termed as “Kanni Jung”, which means fighting with stones. Whereas,  a stone pelter in Kashmir is called Sangbaaz. Indian newspaper the Hindu claimed that stone pelting is driven by the brutal killings of Kashmiri youth at the hands of forces.

Mobs protesting in streets, slogans from mosques and stone pelters in small alleys have been in news for quite a while in the Kashmir valley. The peculiar way of protest is not new for Kashmiris.  In 1930, Maharaja Hari Singh was in London to attend the first round table conference when agitation and protests erupted in Kashmir. Kashmiri leaders Sheikh Abdullah, Chaudhary Ghulam Abbas and Maulavi Abdul Rahim had returned from Aligarh Muslim University after graduating and were spearheading the protests. It is said that it was just after a speech of Sheikh Abdullah, when the very first incidents of stone pelting occurred. To control the situation Sheikh Abdullah was arrested.

On June 21,1931, a muslim youth Abdul Kadir delivered a speech from a mosque in Srinagar and ignited a very violent situation .He was arrested and jailed in Srinagar central jail. On July 13,1931, a large crowd gathered outside the jail demanding his release and turned violent .To control the crowd, police resorted to firing in which 21 protestors were killed. Protests continued unabated.

In recent years, the stone pelting incidents have got prominence in Kashmir from the 2008 Kashmir Unrest in which the freedom movement was completely changed from Gun fighting with forces to the pelting of stones on forces.

After the year 2008, stone pelting incidents in the valley were reported on regular basis, the prominent among them was recorded in 2010 unrest and 2016 unrest, nevertheless minor skirmishes were also reported in those intermediate years. The first few months of 2017 have seen an alarming increase in protests in Kashmir.

The Diary of a Kashmiri.
KITAAB

The Life is not an immune
ASHA: Blast From The Past

The Blog of Aligarh Society of History and Archaeology [ASHA]

Earth is our Common Home, Let's Protect It Together

We're all a paradox. Let's solve it.