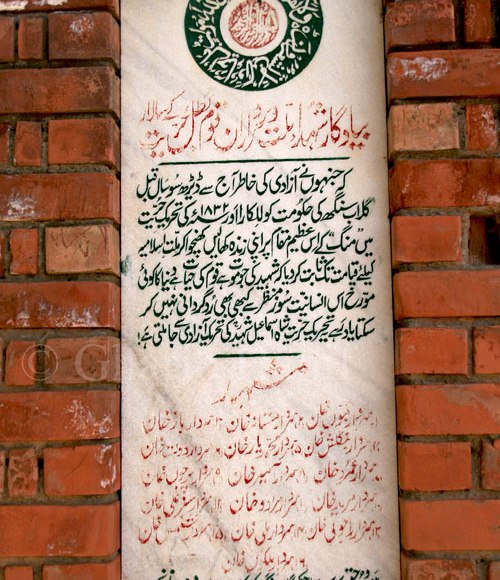 Sabz Ali Khan, Malli Khan and their brave companions are the unsung heroes of freedom movement in the Poonch region of the Jammu and Kashmir. They laid their lives against the despotic rule of Ranjit Singh and his regime’s policies of repression, exorbitant taxes and forced labour.

During this revolt, Sabz Ali and Mallee Khan along with many companions were flayed alive in Mang (Palandri, Sudhnuti).Hundreds of Kashmiri children and women were taken to Jammu as prisoner. Shams Khan and Rajwali were killed by a traitor Nur Khan Terola in the Daigwal village. The heads and Skin of all the rebels were hung of a tree located in Mang( palandri, Azad Kashmir) which is still present
there;

Located in Mang this monument reminds of the henious events of 1832 when the local people of Mang rebelled against the Sikh rule of Ranjeet Singh. At the time, Ghulab Singh was a General in his army and was responsible for supressing any descent. In 1832 there was a rebellion in and
around Mang by the local people and Ghulab Singh was sent to deal with it. M L Kapur in his book ‘the history of jammu & Kashmir’ mentions, “to quell the rebellion in Poonch and Chibbhal territory Ghulab Singh returning from Peshawar and after some desultory warfare, the rebels were completely routed.

Many of them were captured, and treated with vengeance; their hands and feet were severed by axes, while skins of Sardar Mali Khan and Sardar Sabaz Ali Khan, two of the close accomplices of Shams-ud-Din, were peeled off their bodies, and their heads were hung on gallows in a crossing as a warning to others. Hands were ultimately laid on the chief rebel as well, and his head was cut off.” The rebels were hung on this very tree featured here and skinned alive. The practice of skinning alive rebels continued for some time.”

The article is based on information taken from two sources :

1. ”Marriage Among Muslims: Preference and Choice in Northern Pakistan” written by Hastings Donnan.

2.The Resilience of the Kashmir Freedom Movement by Sardar Masood Khan, President Azad Jammu and Kashmir.

Site Title
The Diary of a Kashmiri.
KITAAB

The Life is not an immune
ASHA: Blast From The Past

The Blog of Aligarh Society of History and Archaeology [ASHA]

Earth is our Common Home, Let's Protect It Together